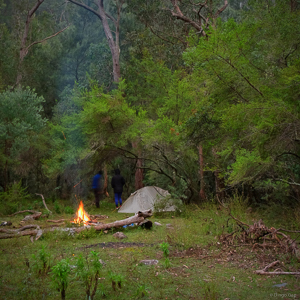 We were blessed with a warm Autumn day for the walk. I was joined by Karin, Eve, Roger, Rogo, and new members Nicole and Bernard on their first walk with the club.

We started by visiting the gradually degrading Aboriginal art site, which consists of two caves facing each other with a now disused mine access road between them. There was a great deal of effort put into locating all the art, some are still very clear where others required a bit of imagination.

From there we walked past the Mount Sinai Halt (a part of the currently closed Zig Zag railway) to the abandoned Picnic ground via fire trails, a better walk then along the Bells Line of road. We discovered a couple of fireplaces, several sets of tables and seats and the two toilet blocks sadly falling apart. It must of been very popular once as a lot of work went into building them. It brought back memories of picnics from years ago.

There is a short walk through open bush before descending into Ida Creek Valley, we took the opportunity to stop for morning tea in a clearing before the descent. The first Hand stencil (very clear) was found and then two more fairly indistinct stencils below it. Along the cliffs on the Eastern side there is lot of graffiti some dating back to the 1900s, others very recently. It was explained to me once that after so many years they all become historic and not vandalism. There was a stencil discovered closer to the Falls, sadly it has been "added" to. 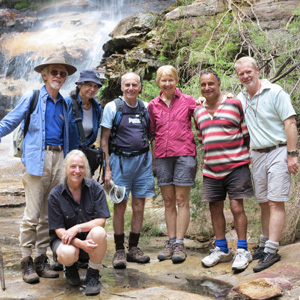 Ida Falls is sometimes dry as it doesn't have a large catchment above it. Today it was flowing very well. There was a nice shallow bathing pool near it's base which on a warmer day may have been tempting. We sat around the base for some time enjoying the relaxing atmosphere and the sound of the water rushing past, a very pleasant spot.

After recrossing the creek, without getting our feet wet I might add, we climbed back up under the Eastern Cliff line and headed North. Try as we might we found no further art, although we did discover a source of Ochre. Around 1 o'clock we stopped in a shallow cave perched high up for lunch. There was a nice view up the valley. During lunch a mysterious cairn of rocks appeared complete with an arrow pointing in the direction we were to follow. Suspiciously Nicole was sitting near there during lunch.

Further along we scrambled up to the Zig Zag Top Points station and explored around the station and an old Queensland Railmotor parked there. Roger found the way through to the Signal Box, complete with a concrete picnic shed. From there we descended down the slope back to the cars.

On the way back we stopped off at the WW2 gun emplacements, or more better described as a garbage tip and blackberry farm, still interesting to see although in need of some care.

It was a bush walk with a scenic tour thrown in.