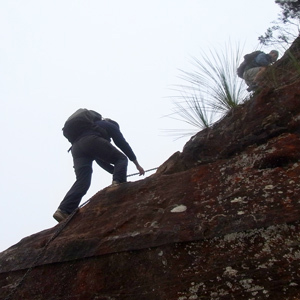 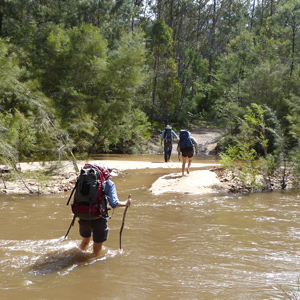 Over the long weekend Karin, Don, Joe and Dorinne accompanied me on a terrific adventure down the Wolgan Valley from Newnes to see the Totem Pole.

Further upstream along the Wolgan River there are other pinnacles that don't have the protection of the cap stone. These pinnacles resemble some of the hoodoos found in Canada.

When we arrived at Newnes we found the river was up after the overnight rain. It was too deep to drive through which increased the walk by 1 kilometre on Saturday and Monday.

We had perfect weather and walking conditions for the entire weekend. 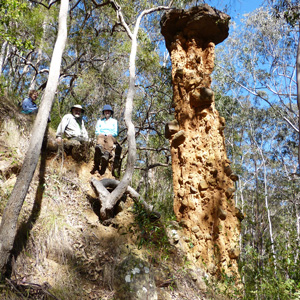 On Saturday we walked to Annie Rowan and camped in a very comfortable grassy area beside the creek. The first 18 kilometres of the walk were along the fire trail beside the river. The 3 water crossings were tricky because of the higher water levels but were negotiated safely. Even though it was broad daylight we saw several wombats.

After a relaxed lunch at the end of the fire trail we headed up the slopes and traversed around to Annie Rowan. I chose the higher route to avoid the acacia and wait-a-while that makes walking lower down so unpleasant. We were rewarded for our efforts by amazing collections of huge elkhorns, flowering orchids, masses of mosses, amazing rock shapes and even a python.

On Sunday we set off early to see the Totem Pole. We were camped a little way upstream on Annie Rowan Creek so it made sense to take the high route and head straight across to the Totem Pole. We avoided the steep slopes and the rubbish growing lower down.

The Totem Pole is incredible. You can hardly believe what you are seeing when you first make it out. As you get closer it seems even more unlikely. We spent some time photographing the Totem Pole and its surrounds. It was a great spot for an early morning tea.

We returned to our camp site, packed up and had an early lunch before heading off to Rocky. For some reason I decided to try the lower route despite the acacias. Once we encountered their needles we quickly decided it was much better to go higher and avoid them. At one spot I almost trod on a wombat - I'm not sure who/what was more startled. 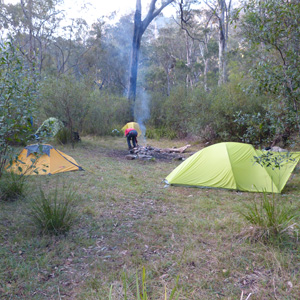 The walk back along the firetrail to Rocky was very pleasant with the afternoon light illuminating the cliffs, surrounded by an incredible array of birdlife and another wombat.

There are several camping spots near Rocky Creek. We chose a very nice spot just a short distance up the fromthe creek - formed fireplace, rocks to sit on and level spots for the tent. Fabulous.

We were woken early by the dawn chorus and after a very relaxed breakfast, broke camp and enjoyed a very 'cruisy' walk back to Newnes. Along the way we stopped to look the relics at the old farm and at Newnes.

We were back at Newnes just after 2:00pm - time for an ice cream on the verandah at the Newnes Hotel.

We covered 52 kilomtres with more than 2,500 metres of ascent.