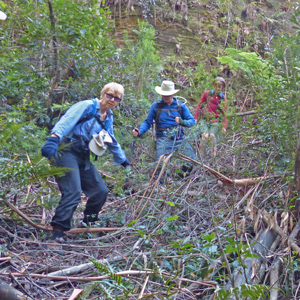 The distance between Wongara Hill and Mt Banks car park is less than 2 kilometres and if you looked at the Mt Wilson topo map you could be forgiven for thinking that it would be an easy walk. It's not - you have to cross Oronga Canyon. We weren't just going to cross Oronga Canyon - we were going to the exit portal, a unique rock platform jutting out into the Grose Valley with Oronga Creek split in two and dropping over the cliff in separate streams.

Our route took us from Bells Line of Road across Wongara Hill to the Grose Valley for the first of the many spectacular views on this walk.   From there we headed east into Oronga Gully.

Close to the Grose Valley, Oronga Gully is lined with cliffs. The bush is extremely thick with healthy colonies of sword grass to make it interesting.

Several of our group had been tried to broach the cliffs on a previous walk. Our route had taken me 3 exploratory walks to put together. 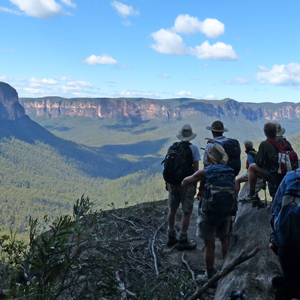 After negotiating the top layer of cliffs we took a short morning tea break on a large rock outcrop before entering a slot that would take us through the middle cliff line. After a short traverse towards the Grose valley we were able to scramble down an unlikely looking ramp actually provided access to the creek bed about 20 metres up stream from the Grose Valley. A few minutes later we were all on the rock platform, seeing the Grose Valley from a very unusual location. The rock platform was large enough to fit the whole group. The wind was howling so we didn't stay as long as we might.

Lunch was taken on the pagodas at the top of the slot with views up and down the canyon.

When you look at the topo map you can see Oronga Ridge splits into 5 different spurs or fingers that run down to the Grose Valley. After lunch we followed the cliff line, visiting each of those spurs one after another. At the first we we could clearly see the rock platform in Oronga Canyon that we had visited earlier.

We took our afternoon tea break relaxing on an open section of the spur closest to Mt Banks.  We had terrific views of Banks Wall, down the Grose Valley and all the features on the southern side of the valley.

Eventually though it was time to go.  A short sharp climb and we were at the car park.

We walked just over 6 kilometres to complete that 2 kilometre distance. And unusually the walk was mostly down hill.